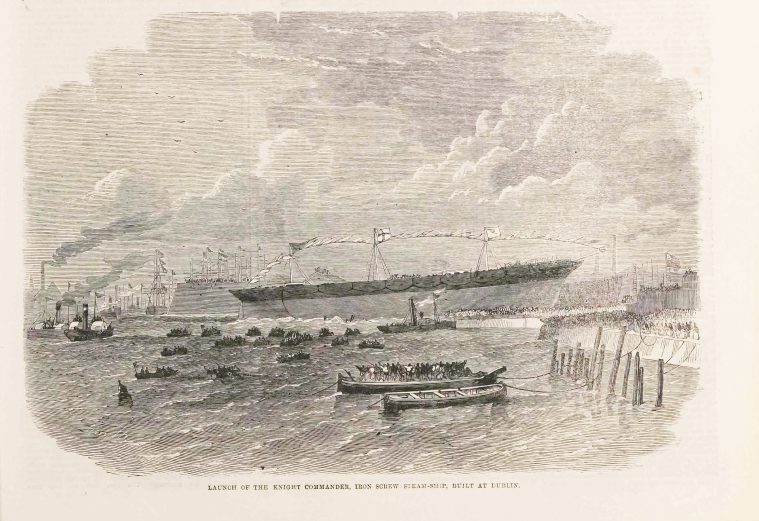 The Knight Commander was the first vessel launched in the Dublin Port graving dock since their gates opened for the first time in February 1860.

It was the 25th of February 1864 and the occasion was huge for Dublin. According to the Illustrated Times, 20,000 spectators gathered to attend the event, although the space at the port premises was limited as admission was by a ticketing system.  People congregated in every possible spot that offered a view of the event with the Ringsend wall being the best spot to contemplate the launch from afar. Not only every inch of land was taken up by the spectators, but also the Liffey mouth. Numerous boats, including a steam tug, cramped the river waters opposite of the slip. Very relevant Irish personalities attended the launch. The Marchioness of Kildare was the godmother of the new vessel and broke the customary champagne bottle on her hull. A breakfast for 300 people was organised in one of the workshops next to the yard. 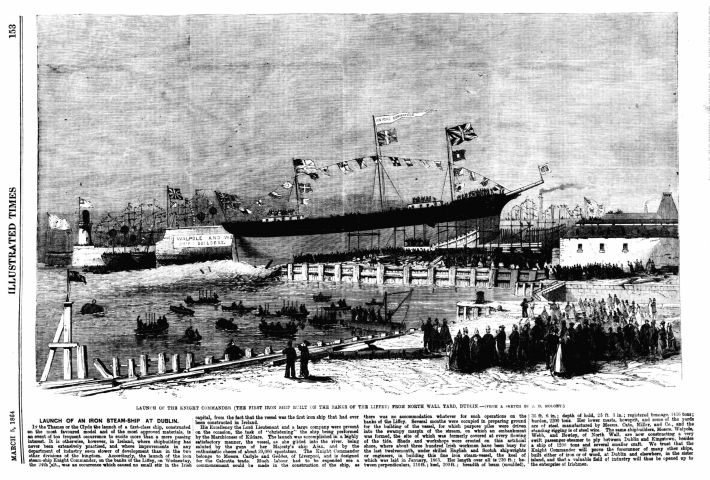 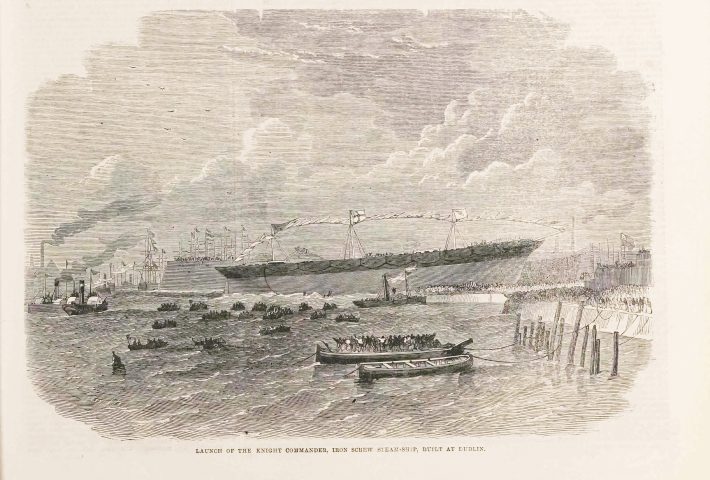 Messrs James Carlyle and Andrew B. Geddes, who operated a shipowning and merchant firm under Carlyle and Co. (Liverpool), commissioned the ship for the Calcutta trade. The firm had their ships built in the Mersey yard for seven years. However, they decided to get the Knight Commander built in Dublin thanks to Thomas Walpole’s charm and boldness. He visited Liverpool looking for work to bring to the newly established North Wall yard.  It must be pointed out that there were 12 yards operating in the Mersey at the time. As Mr Carlyle said during his speech at the launch “it was rather a bold stroke on his part. But the bold stroke always gains the day”.

Thomas Walpole established the yard in 1863 with Henry Webb in the shipyard next to the new graving dock built by the Dublin Port Authority. In 1864, the Bewley family joined the enterprise. Walpole already had a strong background in shipbuilding, having worked for several years in the White’s yard at Waterford. He had earned a good reputation, which helped to bring commissions from Mersey shipowners and in getting the Bewleys support.

“The Knight Commander was the first vessel launched in the Dublin Port graving dock since their gates opened for the first time in February 1860.”

The Knight Commander had a rocky start and end in her maritime career. In her maiden voyage to Calcutta, while anchored at the river Hooghly, she was caught in the 1864 cyclone. Of 200 ships anchored in the only ten were still at their moorings after the storm, the rest either stranded or sunk. The Knight Commander underwent damage from colliding with other ships and required some repairs. She stayed in the Australia and Calcutta trade until 1883, when she was sold to Henry Ferne & Sons, also from Liverpool. In 1890 she changed ownership again to Lowden & Co. who turned the vessel into a barque rig.

The Knight Commander faced her end during a journey between Hoboken and Yokohama. The Vladivostok squadron visited the Knight Commander while approaching the Japanese coast. They claimed the cargo carried was contraband. Under international law, during times of war, contraband cargo is subject to seizure. Prize courts were the bodies responsible for determining if the cargo was unlawful and adjudicating it to the captor. In the Knight Commander’s case, there wasn’t enough coal to take her to Vladivostok prize court, so she was sunk. The case generated great controversy because of the lack of a trial and due to her neutrality.