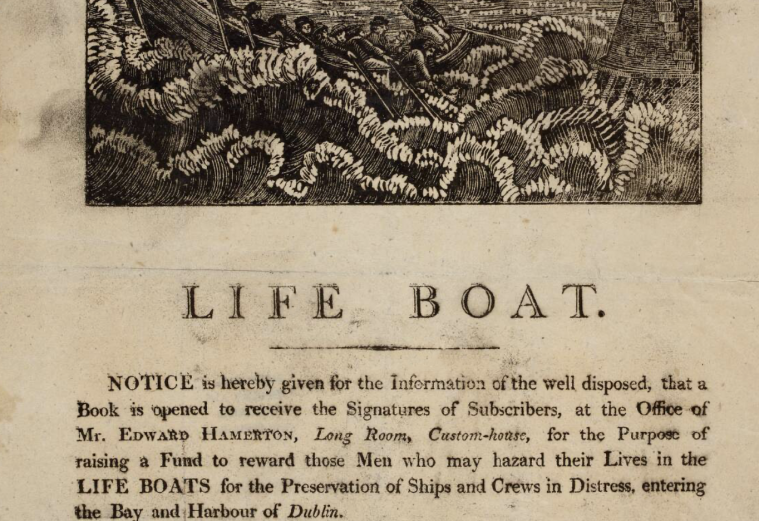 In 1800 the Board of Dublin Port then known as the Corporation for Preserving and Improving the Port of Dublin decided to place lifeboats around Dublin Bay.

The initial boats were built by Ringsend boatbuilder John Clements, and the first lifeboat was based in Clontarf. At that time Clontarf was a busy fishing village, an industry that declined after the construction of the North Bull Wall from 1819-24. The next lifeboat was stationed in Sandycove in 1803, followed by one in Sutton in 1805 and then a fourth at Pigeon House in 1815. The final lifeboat was based in Howth in 1817 after the loss of a ship there in October 1816.

Each lifeboat was looked after by a Port employee who lived nearby and they were paid 6 guineas per year. The boats themselves were rowed by a crew of volunteers consisting of Port employees, Pilots, Coastguard members and Soldiers. After the lifeboat was launched a report would be made to the Board requesting remuneration for the crew’s services. In one such report, of which there is a copy in the Dublin Port Archive, dated 28th December 1821, William Hutchinson who was responsible for the Sandycove lifeboat gave an account of the attempt to save the crew of the Ellen from Liverpool which was wrecked on what is now the Forty Foot. He set out in the lifeboat into a violent gale from the south east to “save the crew from a watery grave, their cries being most affecting”. 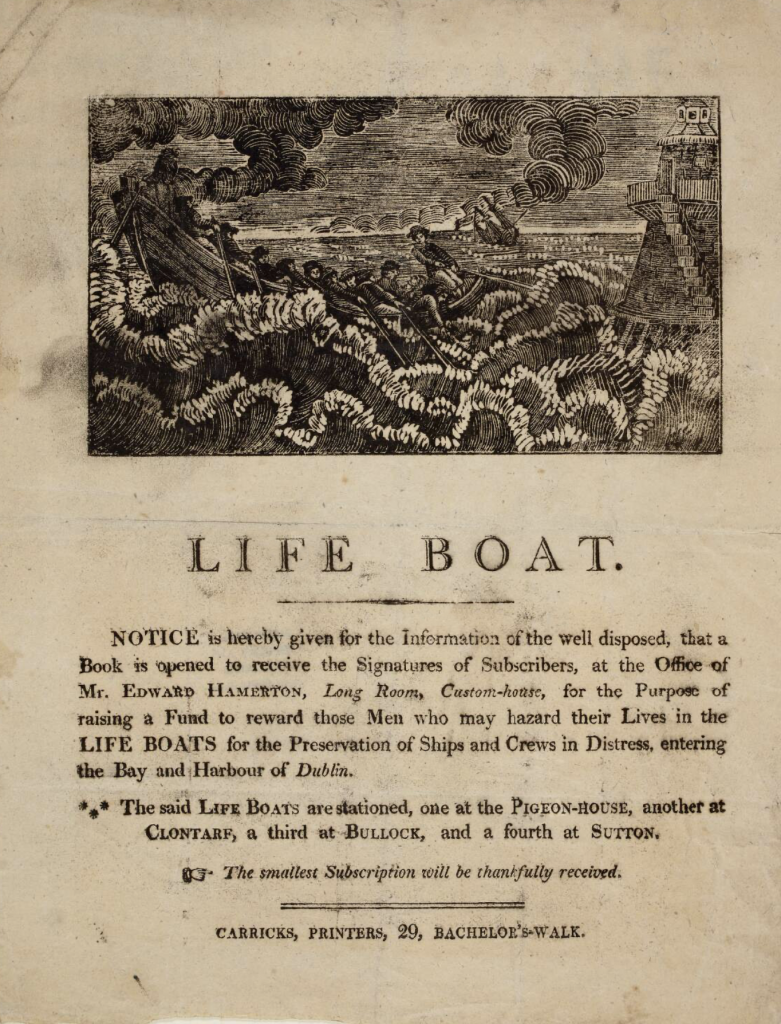 As the lifeboat started to take crew off the Ellen it was swamped and three lifeboat men drowned, and the lifeboat returned to the shore without oars where a fourth man “who from exhaustion let go of his hold and was washed out among the rocks”. There were fourteen crew members in the lifeboat and the four who drowned 200 years ago were; Hugh Byrne, Thomas Fitzsimons, John Archbold and Thomas Grimes. The Board granted pensions to the families of the two married men and to the parents of the others and to William Hutchinson a silver tea service to the value of £50. 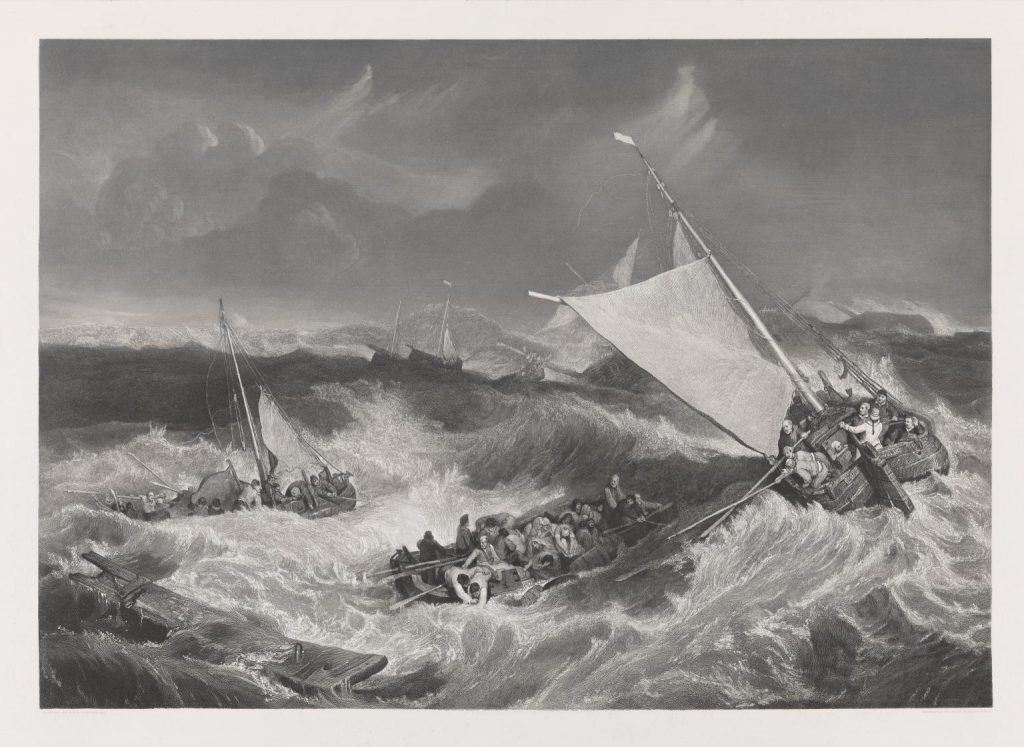 Hutchinson dominated the lifeboat service in Dublin Bay from 1817 to 1880 and was involved in countless rescues. He was born in Dublin in 1793 and joined the Royal Navy at the age of 13 eventually becoming an officer. In 1817 he started working for Dublin Port as Harbour Master of the older and smaller Dunleary harbour, as it was known then, and as inspector of the Ports quarries at Bullock Harbour. The land at Bullock had been leased from the Carysfort Estate in 1804 by the Port to quarry stone which was then transported across the bay to be used on the Great South Wall, North Bull Wall and Howth Harbour. In 2019 Dublin Port celebrated the 200th Anniversary of Bullock Harbour with an exhibition in dlr Lexicon in Dun Laoghaire. 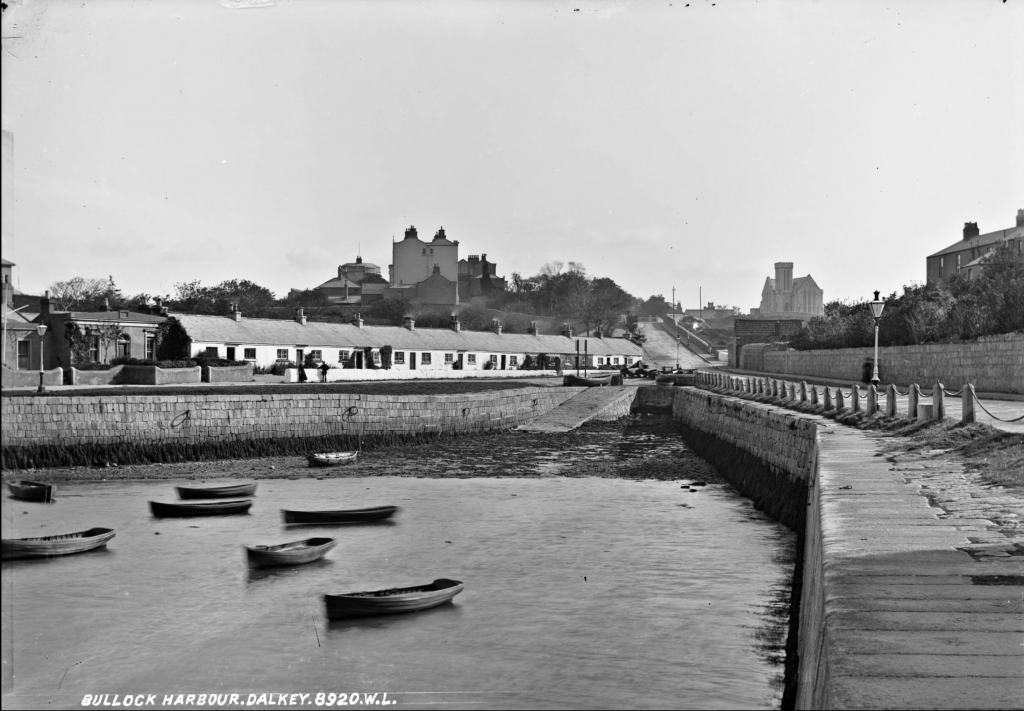 In 1829 after saving the crew of another ship The Duke William Hutchinson was awarded a gold medal by the newly created National Institution for the Preservation of Life from Shipwreck, which would become the Royal National Lifeboat Institution (RNLI) in 1854. In 1861 after 60 years of operating the lifeboat service, Dublin Port began negotiations with the RNLI to take over responsibility of the 3 remaining Port lifeboats at Dun Laoghaire, Howth and Pigeon House. William Hutchinson was then the first honorary secretary of the Dun Laoghaire branch of the RNLI, a role he held until his death in October 1880, at the age of 86.