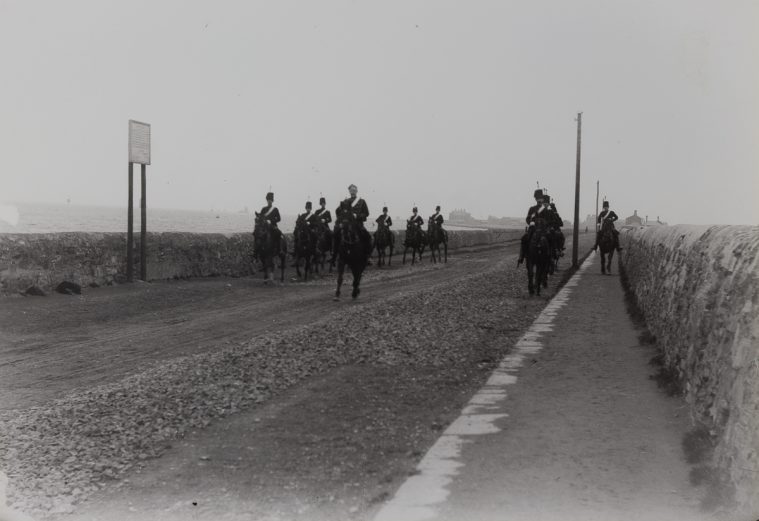 As grey morning mist rose from the Liffey, throngs of Irish troops marched westward along the river.  The soldiers, clad in green and wearing heavy coats to protect from the biting December winds, strode confidently to Irish military tunes. They were headed to the various military locations— such as the General Headquarters of the British Army at Parkgate, Marlborough Barracks, and the Royal Hospital at Kilmainham— that had long been occupied by the British army. The Irish army was to replace the British soldiers at these locations on this day, December 17th 1922, marking the historic end of a thousand year-long British military connection.

Dublin residents around the city awoke to the clamour of activity outside and began to line the streets with the hopes of glimpsing this monumental transfer of power. The final guards at each British barrack and depot mounted their posts at seven am, awaiting the arrival of the National army. Detachments of the National army then began to inspect each post at eight am, in preparation for the takeover. Jovial throngs of Dubliners, awaiting the events that would follow, packed around each of the British occupied areas.

Marking the beginning of the day’s ceremonies, the gates of the British General Headquarters at Parkgate Street were opened at nine am sharp, allowing for Irish troops and the Irish command to file in. Journalists and photographers crowded the gates headquarters, waiting to capture the moment.

The formal change of power began with a transfer of gate sentries. The English sentry was dismissed, replaced by an Irish sentry. A sign in the guard window reading “Love one another” could be seen during this exchange, indicative of the peaceful nature of the day. The Irish tricolor was then raised, attended by National officers, who saluted the flag as it was hoisted. Further Irish sentries were next placed around the headquarters.

Following a goodbye exchange between a British and Irish officer, the British troops formally marched out of the headquarters, greeted with good-humoured farewells from the gathered crowds. The ceremonial activities then moved to the Royal Barracks. Irish and British troops faced each other— the British troops dressed in full battle regalia— at the barracks. The British soldiers then turned to march out amidst the stirring music of the Irish army’s band, parading down the square, saluted by rows of Irish troops.

General Mulcahy, Commander-in-Chief of the Irish Republican Army, inspected his troops upon the British departure at the Royal Barracks and began a rousing speech, delivered in Irish. He spoke of the way Ireland had long been occupied by “enemies of the nation”, an occupation, he impassionedly noted, that had finally come to an end.  The Irish army were to assume the positions once filled by British soldiers, acting with an entirely different spirit than the British.  General Mulcahy tasked the Irish troops with building up the country, making Ireland into a country that the citizenry could be proud of.  He noted the necessities of courage, discipline, and order in the soldiers for the rebuilding of the country. Mulcahy concluded with a call for Ireland to become the country that many had only dreamed of, one developed from that materials and gifts bestowed upon the land by God.

The next location of transfer was the Royal Hospital. The British Commander in Chief General Macready, who held great disdain for the Irish, awaited the arrival of the Irish forces at his residence at there. General Macready was ready to march out of the Royal Hospital the moment the Irish troops arrived. After the replacement of the guards, Macready scanned the Irish soldiers, reportedly looking pleased, and promptly turned to march away.

Irish troops then continued onwards to the Marlborough barracks. The soldiers marched into the barracks against the beat of an Irish military song, faces glowing with joy as they strode against the fanfare.  One newspaper points to this moment as a particular point of pride for all observers, moving many who watched to tears.

Other less notable places were then evacuated.  The British troops flooded the streets, marching from O’Connell Bridge to the area of embarkation at the North Walls. Thousands of Dublin residents lined the roads to watch the affair. Spectators cheered, some waving union jack flags and handkerchiefs, bidding the troops farewell. By 4:30 pm, the British ships were ready for departure, sailing away with messages reading “Farewell, Dublin” and “Don’t Splash” chalked onto the sides of some boats. As the final boats drifted off, an exhilarated farewell cheer sounded from the hordes of Dubliners watching the send-off, echoed with mutual cries by British forces from the ships.  The transfer of power, at this moment, was complete, and Ireland henceforth was free of British occupation.