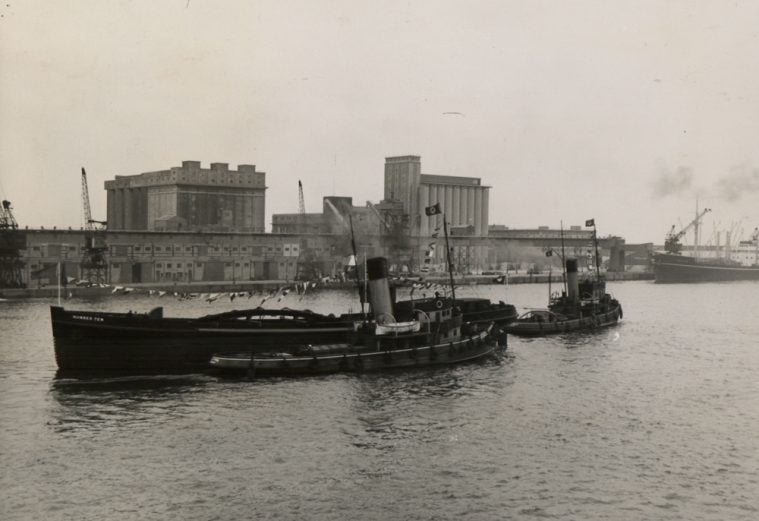 Dredging is essential for the proper functioning of any port. Essentially, it consists in removing materials from the sea or river bed. Its importance relies on the following factors: water depth requirements for navigation and getting material for ballast, construction, and land reclamation.

On water depth and navigation, it is a matter of simple physics. If the ship draught is greater than the water depth, she runs aground. Dublin Bay is shallow and shelving. It doesn’t offer the best conditions for navigation. The sandbar at the mouth of the river also complicates things. Ireland is a small island. Its size limits those of the rivers flowing across her land. There is a direct link between the length and surface of a river basin and its flow or discharge rates: the smaller the basin area, the smaller the discharge rate. Therefore, river flow is not strong enough to carry away the silt discharged, which formed the sandbar. The Liffey average flow is only 14 tonnes per second. Quite small compared to other European river ports. For instance, the Elbe, which flows through Hamburg Port, is c. 700 tonnes per second and the Schelde at Antwerp is c. 120 tonnes per second (and these two are nothing compared with the over 8000 tonnes/second discharged by the Volga or the Danube rate of c. 6,500 tonnes-second). Hence, siltation has always been an issue in Dublin Bay.

Besides this the ballast of a ship only worsened the problem. Sailing ships required ballast for stability, especially when light. As cargo was loaded, ships dumped the ballast excess clogging the river and harbour. Indeed, the first port authority was formed to take control over the ballast management and ensure the channel and river were kept clean. It was known as the Ballast Office for this reason.

“The dredging plant was affected by the 1913 lockout. Port workers, including Cranemen and dredging crews, went on strike in sympathy with the men locked out by the city employers. The dredging plant had to be laid up. This complicated the work at Dublin Port.”

Another added problem came with the advances in ship engineering. By the 17th century, the ships calling in Dublin Port were between 20 to 70 tonnes (but more in the 20 range). Not even 200 years later, it had increased to 1000 tonnes. Such an increase clashes with shallow waters. If we look into historical accounts of Dublin Bay, we find sailors hadn’t a favourable opinion. Dublin merchants weren’t happy either since ships called to safer ports.

The solution was to fight the sand and debris blocking the river mouth. Indeed, we well might summarise the history of Dublin Port as a constant fight to achieve deeper waters. Port Engineers conceived superstructures like the North and South Walls for that purpose, designed to stop sand and debris building up at the river mouth. Continuous dredging was required in the river to achieve and maintain the depth. Up to the 19th century, the general approach for deepening river channels involved narrowing the channel by building quay walls further into the river. Mechanised dredging improved the depth of water. In 1797, Sunderland Harbour witnessed a steam dredger at work for the first time. Bucket ladder dredgers came into the picture in the early 1800s.

Early dredging methods were manual, and thus slow and laborious. One of the most extended ones was the “bag and spoon”. It lies in scooping sand and gravel from the river bed. The so-called spoon was a pole ending in a net. A mechanism of ropes and windlass helped move the spoon. The crew lowered it perpendicular to the bow, dragged it along the river bed and finally raised it at the stern filled with sand. The Dublin Port dredging fleet comprised of 18 lighters (60 tonnes of capacity in each) and a crew of 9 men. Filling each lighter required 4 hours of extenuating work.

It was George Halpin who took the first step towards the modernisation of dredging at Dublin Port. He convinced the Ballast Board to purchase the steam dredging vessel, Patrick. It was a bucket-ladder dredging, being the bucket chain driven by a steam engine. It was not capable of self-propulsion and had to be towed. Anthony Hill, a shipbuilder based in Dublin, built the new dredger, although the firm Fenton, Murray and Wood of Leeds supplied the motor and plans. Patrick’s first gig was to dredge the channel at Ringsend gut, the channel leading to Grand Canal Docks in 1815. Throughout the next 45 years, the Port commissioned two other bucket-dredgers to Scottish firms.

In the 1860s the Port Chief Engineer Bindon Blood Stoney came up with a new dredging system: the hopper-float system which was already in operation at other ports such as Liverpool and hull. The dredger loaded the hopper-floats, which had bottom doors. These doors allowed the dredged material to be dumped offshore, in any suitable location where the tidal currents would disperse the deposited soil. This posed a significant advantage since not all the dredged material is suitable for reclamation and this system allowed a much more convenient way of disposing of it. Over £500,000 was spent on the new fleet: five hopper-floats and a new dredger. Bindon’s project came just right in time. Since the 1830s, the total tons of shipping arriving through the port had increased by 3.5 times. Regarding ship sizes, by 1830-1840 standards, 400 tonne ships were large, meanwhile, by 1866 1000 tonne ships were commonplace. However, this short golden age for dredging ended in the 1880s. The change in how tonnage dues were calculated cut down port earnings, which curtailed the Port dredging scheme.

By 1899, the depth of the water at the bar had severely deteriorated. The Port contracted the Dutch firm Kalis to mend the situation. The work was completed in 1903 when 750,000 tonnes of sand were pumped near the graving docks area for reclamation. That same year, Dublin Port and Docks Board commissioned the Sandpiper. The Dutch shipbuilders Smit and Zoom built the new suction dredger. The Sandpiper was used to keep the water depth at the bar for the next 50 years, and it was essential for the land reclamation scheme the board undertook.

The dredging plant was affected by the 1913 lockout. Port workers, including Cranemen and dredging crews, went on strike in sympathy with the men locked out by the city employers. The dredging plant had to be laid up. This complicated the work at Dublin Port. The Great War also took its toll on port dredging plans. Difficult supply conditions and high prices halted the replacement of the dredge fleet, which was worn out by that time. However, in the 1920s, the situation improved, allowing the Port to purchase a new bucket-dredger named the Deepworker. Lobnitz & Co. of Renfrew, Scotland, built the new vessel. Her principal duty was dredging the river channel from Butt Bridge to the bar and Alexandra Basin. She was soon as well-known as the Sandpiper, not only to port workers but to Dubliners who passed along the quays. Both dredgers were essential to complete Joseph Mallagh’s projects (1922-1931). His method was recognised internationally as an important development in port engineering. The Sandpiper played a significant role in filling the caissons with dredged soil.

Port dredgers and hopper barges kept working on port expansion and land reclamation until the mid-1960s. The dredging fleet was deemed uneconomic. It was more efficient to place maintenance contracts with prominent dredging contractors to deepen the bar and maintain the shipping channel. The Deepworker was sold in the early 1970s whereas a new grab dredging pontoon was ordered from Verolme Dockyard solely for berth dredging. Number ten was the last hopper-barge commissioned by the Dublin Port and Docks Board in 1955 and the last unit of the fleet to be sold in 1983.